Spinning a Yarn: Clicks that Tell a Tale 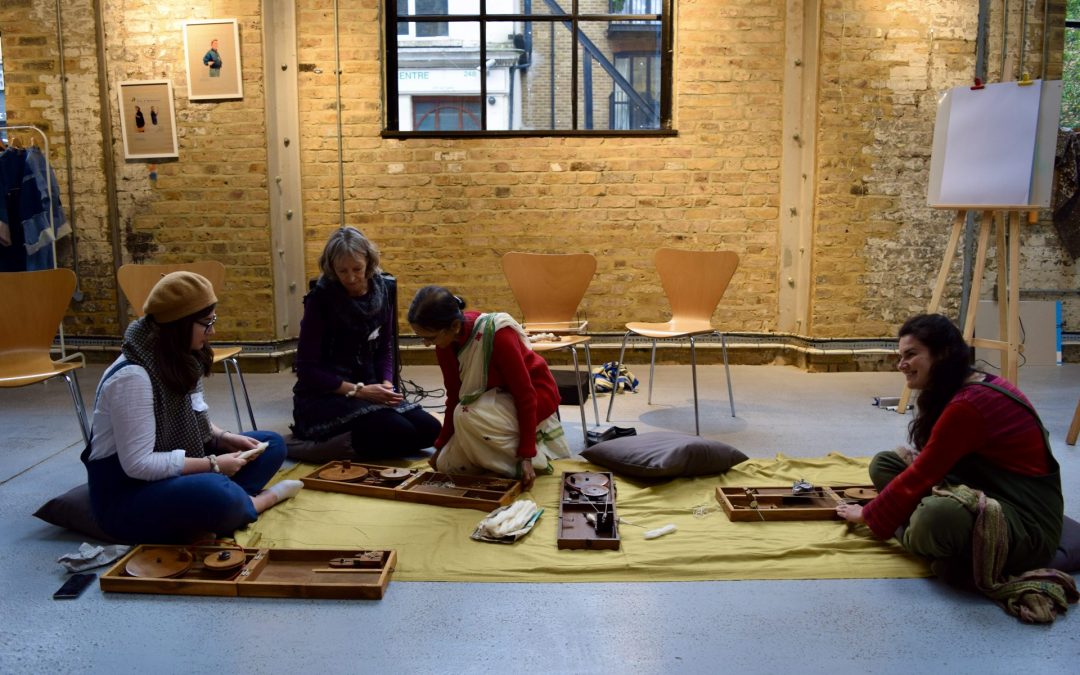 Rose quietly moved around the festival venue, a heritage iron forgery in London. Capturing the mood and sights of the day with her camera. A few felt her presence, but she made our collective experience memorable with her photos. Images with stories and stories within stories. I thought of a photo blog around a young girl’s fascination with a spinning wheel titled ‘A song of Hope’ when I first looked at Rose’s albums. It didn’t feel like a complete story. I looked again and again till a larger narrative began to take shape. A story with Asha and her charkha at the centre. The title I began with became a sub heading of a photo blog called ‘Spinning a Yarn: Clicks that Tell a Tale’. Rose’s photos tell the story. I play the role of a ‘sutradhar’, the thread that holds it all together.

Asha Buch grew up in a family of activists supporting India’s freedom movement under the guidance of Gandhi. She learnt to spin at the age of about seven or eight, a skill that she has honed over the years and enjoys passing it on.

Zooming in on the Box Charkha

Gandhi revived the spinning wheel in 1918. The box charkha was invented two years later in 1920, a hundred years ago. The box charkha was convenient for Gandhi who spent more time in prison and on the train then in his ashram. It is also called Bardoli charkha, named after a prison where he spent time as a guest of the Raj. Activists could carry it around when they travelled around for organising villages and when they attended party conferences. Mass spinning at political meetings became the norm.

Images in the gallery below zoom in on the box charkha, the little machine that never fails to fascinate.

Zooming Out: Sharing the Skill

Asha’s skills as a teacher and a spinner are inspiring a growing number of charkha enthusiasts in London. Her presence at ethical and sustainable fashion events helps ground conversations. Learning to spin seems daunting at first, but once you get the hang of it it’s fun and relaxing. The photos in the gallery are from the spinning workshop at the Festival.

Spinning a Yarn, Singing a Song of Hope

Thanks Rose for capturing an intriguing exchange between Asha whose name means hope and Swara. Swara is one of those many Sanskrit words with multiple layers of meaning. The meaning that sprang to mind when I saw the photos was of musical notes. Swara also denotes the idea of a voice as in metaphorically singing from the same hymn book. It felt as if Asha and Swara were singing a song of hope through that little exchange.

And finally, introducing Nitin and his global walk for peace

One last photo before we go. We were lucky to have Nitin Sonwane in our midst – on the right in the photo below along with Asha, Swapnaja and Swara. Nitin is a gentle soul who has been walking and cycling around the globe for the past three years, spreading the message of peace and hope.

PS – Swara was persistent at the event and I learn that she has been persistent ever since. She is itching to get hold of a charkha for herself.

Some Info and Resources:

The Festival was organised by Khadi London, Freeweaver Saori Studio, ONE, and, Boho Homes London with support from Craft Central who sponsored the venue.

Freeweaver Saori Studio and Khadi London organise spinning workshops at regular intervals and hope to continue doing so once we return to a ‘New Normal’.

And finally a couple of videos for spinning on a box charkha – they go together.