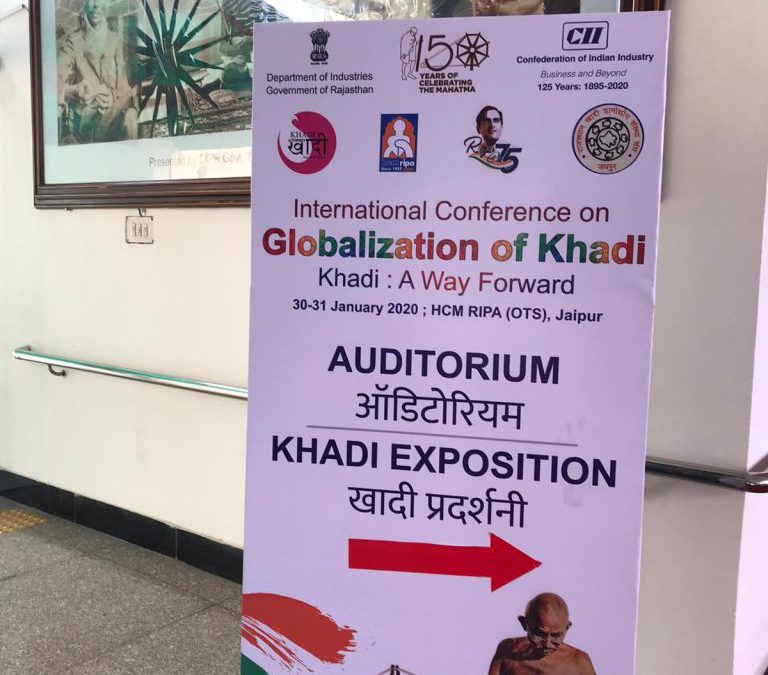 International Conference on Globalisation of Khadi

Earlier in January this year, I had the opportunity to represent Gandhigram Khadi Trust. I was invited to speak at an International Conference on Globalisation of Khadi held in Jaipur on 30th and 31st. Over the two days and six sessions, the conference covered pertinent topics surrounding khadi like community empowerment, environmental concerns, export potential, marketing, and design directions and more. The two days of the conference were intense and informative. There was an interesting mix of experts, policymakers, designers and sevaks who spoke about issues and concerns closest to them. As with events and conferences which include people from various parts of India and the world, there was a tug-of-war between Hindi and English. While we should to retain our various languages, it’s not effective when we want inclusiveness and participation at a purpose-filled conference. I too found myself going back and forth between the two. The conference in Chirala addressed that concern by having live translators. Perhaps this would be a compelling design challenge that needs solving?

Gandhi, Khadi and the Spirit of Freedom

The event was in remembrance of the 150th Anniversary of Mahatma Gandhi. Gandhiji was the pioneer in bringing khadi its global recognition during the freedom movement. Ms. Asha Buch of Khadi CIC, London, through her talk, connected the relevance of Khadi as a symbol of the freedom and its symbol of a future society. She says “The spirit of freedom still lives on, only the elements to fight against and its methods will have to change”. She shared with us the historical aspects surrounding the fabric. Fumie Kobayashi from Japan took us back to the 17th Century Edo period where Indian fabrics were traded and used in Japan. Apparently, many of these fabrics came from the Santhome port in Tamil Nadu. The visuals of the art from the Edo period were intriguing as we can see the similarity in the fabrics woven in India. She is keen on promoting Indian fabrics and local artisanal work in Japan and other countries.

Khamir in Kutch has been deeply involved in the resurgence of kala cotton, the indigenous local variety of cotton, which is hand-spun and handwoven. Mr. Ghatit Laheru, the Director of Khamir, threw light on the process from farm to fabric. He mentioned their work with the local wool and the challenges they face especially due to Merino wool and acrylic wool that has flooded the market. In her talk, Juhi Pandey of Lady Bamford Foundation spoke about local wool varieties and how khadi should focus on building local resources, and the need to support indigenous and traditional practices. Similarly, Swaminathan of Kaskom shared the benefits of desi organic cotton. He also highlighted it’s long term implications on the health of the planet.  Ms. Shalini Amin of Moral Fibres put forth an important point that khadi should be made accessible for all strata including the makers and not just for one class of society. On a related note, Jo Salter took us through her journey behind ‘Where Does it Come from?’. She emphasised on the transparency of the process. Interestingly, they provide their customers the complete information from the farm stage to the final product.

Sustainability and innovation in khadi was focus of my panel. A fellow speaker put forth a platter of suggestions and improvements that khadi institutions need to implement to make khadi more accessible. Through my talk, I was able to present the innovation and changes that a Khadi Institution like Gandhigram is already working on. At the end of the talk I realised that we need more platforms to share and speak about the positive work that people are doing and perhaps enable other organisations to implement them as well.

Khadi: Fabric with Layers on Meaning

Ruma Devi of Gramin Vikas Evam Chetna Sansthan, Rajasthan shared anecdotes of growing up in Barmer surrounded by textiles. She showed us a stunning ‘dhabla’ that her grandmother made herself, and how these practices are now reducing. Ruma Devi, inspired by her grandmother’s embroidery skills, brought together women from her hometown. Together they embroider and make clothes that have gained global recognition. I was in awe of her simple attire, a reflection of her work and journey. In contrast, there was a famous fashion designer who spoke eloquently on the wonders of khadi while clad in synthetic, power loom fabrics. ‘Khadi’ has layers of meaning woven into it. Technically, it is a fabric that is handspun and handwoven. But the fabric addresses other concerns like – rural employment, rural empowerment, environmental preservation, economical support, and even spiritual growth.

Reflecting on the Khadi Conference

The discussions and conversations raised some questions at the conference and some in my head. Do we look at Khadi as a thought or only as something tangible? Given the repressiveness surrounding BT cotton, can it be used for khadi? Is Ambar charkha spinning considered a hand process? How many spindles would make it a mill? Does the fabric need a government subsidy to be viable in the market? If it does, then is it an economically sustainable option? While solar is environmentally better than other power sources it is still driven by consumerism? The meaning of khadi is evolving and it is crucial to have discussions like these from time to time and keep ourselves in check. I’m grateful to the organisers (Govt. of Rajasthan, CII, and others) for inviting me to present the fantastic work the team at Gandhigram is engaged in.

Reflections of the Conference by Aditi Jain. Originally published on her website. Reproduced with permission. Aditi is a crafts and textile designer, facilitator and observer. Aditi has a deep appreciation for everything handmade. She loves documenting stories of people places and objects.  Featured Image: Erna Janine/Freeweaver Saori Studio

On the Khadi Conference from our Blog Space