KAKADDARA: Tradition and Change in A Tribal Village 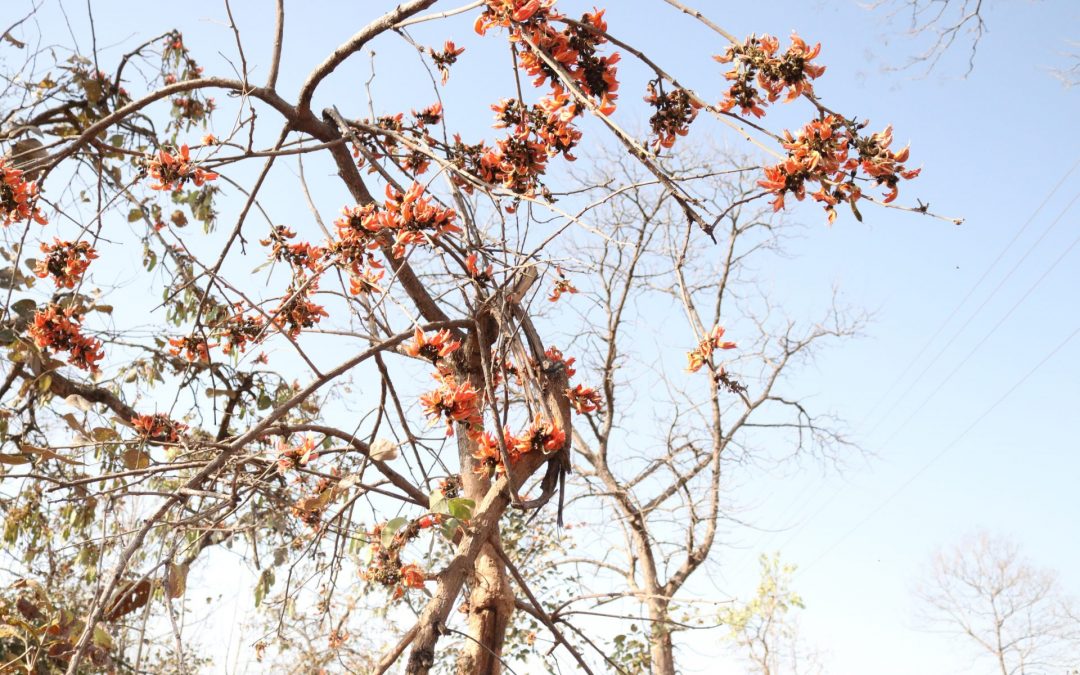 Note: Amit and Swapnaja reflect on their first visit to the village of Kakaddara in December 2020. They reflect on their visit, giving us a glimpse of changes taking place in a tribal village and on the challenges it faces.

A pleasant drive: Meeting farmers along the way

Our destination was Kakaddara, a tribal village about 45 km from Wardha city, a village surrounded by forest lands. Our children, Swara and Arnav, were filled with excitement as we started off early in the morning. Little did they know that it would be the first of many journeys along the same route.

Our first stop along the way was Umri village where we met Moreshwar Shirsam. He has been cultivating organic cotton for the past eight years. He gestured in a happy and confident manner, pointing towards his cotton fields, where his success with organic “Non-GMO” indigenous hybrid variety Partek was evident. Moreshwar was looking forward to a bumper yield. On the other hand, the conventional “BT (GMO)” cotton had failed miserably owing to pink bollworm.

Panjra, just two kilometers away from Umri, was our next stop. We met Ishwar Kasal, a progressive farmer owning about 2 to 3 acres of farmland. For the past few years he has experimented with different varieties of cotton, indigenous and American. Yet, he is perfectly happy with the Non GMO cotton he has harvested this year. These little pockets of organic and Non-GMO cultivation where the GMO BT cotton reigns gave us hope.

Kakaddara: Winner of the Water Cup, 2017

Further along, another 2-3 kms from Panjra stood a tribal village, Kakaddara. Inhabited by almost 80 families, with a population of about 400 inhabitants. Agriculture is their main occupation and source of livelihood. By and large they work on their own farms. Only about ten families work as farm labourers in nearby villages.

It was dark by the time we reached Kakaddara. Even in the dark, the village felt distinct. Arun Linguse welcomed us to their simple but beautiful house, built a few years ago with mud and stones. It was built with assistance from the government housing scheme for villages, Gharkul Yojna. Arun is a hard working farmer, and a leader of the persuasive kind, who had been instrumental in unifying and mobilising the villagers during the Paani Foundation competition. We were fascinated by the
kitchen, especially the traditional ‘chulha’. We were served a delicious, hearty meal. For Swara and Arnav an exciting end to the day as they enjoyed swinging on a rope swing in the front courtyard after the meal. .

Arun bhau introduced us to Daulat Ghornade, another farmer leader. Daulat bhau talked about the change, about how the village could act for a better future. Together we made our way to the village meeting hall situated in the heart of the village. Some villagers had gathered outside the hall. A few women were seated inside and spoke little during the meeting. The younger generation was conspicuous by its absence.

A sense of prudence and accountability was immediately visible. The discussions were amicable, some agreements and some areas of disagreements. No wonder the village is known for its sense of unity and a concern for the welfare of all. The meeting continued till midnight. The fresh earthly aroma and the warmth in the smiles on the villager’s faces made our day.

Short glimpse of the tribal life in India

The following morning, our day began at the crack of dawn, at six with a cup of tea and spell-bound beauty of the village encircled by a forest. We ambled around the village, greeting and chatting with villagers as they set out for the day. The kids enjoyed the company of goats, cows and their calves.

We passed the village well used exclusively for drinking water. We chatted with women gathered around the well, collecting water for their homes. Breakfast awaited us when we returned to Arun bhau’s home.

Arun bhau became emotional when we started talking about the challenges which the village faced. The Water Cup victory hadn’t been easy. They received government support and a donation to see them through the days when they did shramdan, working voluntarily for common good. They would have earned more as farm labourers. But the village had a vision, they could see how their efforts will lead to a better future. They were right. The benefits from soil and water work which they did during the competition has had a visible impact. Levels of migration have come down drastically.

Talking about health care, Arun bhau described how difficult healthcare was just a decade ago. They had no vehicles, they were compelled to carry patients on their shoulders. The only hospital in the nearby area was 15kms away and they had to travel by foot. This has changed. There are motorbikes in the village now. Travel to the market and hospital has become easier. Education continues to be a challenge, especially for secondary education. The students have to travel far for high school and for college, resulting in high levels of dropouts.

Considering water and irrigation -related problems, the village worked tirelessly for the Water Cup. But the problem has not been eradicated from the roots. Most farmers practice rain-fed agriculture and await the monsoon precipitation. Cash crops dominate, cotton, pigeon pea and soybean. Combined with an increasing use of chemicals in the field, the land is deteriorating, becoming less resilient.

This year there was an attack by pink bollworm on the cotton due to which farmers suffered heavy losses. Winning Water cup and NGOs tirelessly working couldn’t suffice the need of Kakaddara. The village still requires a helping hand in education, livelihood, water and soil conservation and forest ecology.

A hope for tribal betterment

It was 9:30 in the morning, the sun was overhead and the temperature had started rising. We had a glimpse of tribal life by staying with them for a night. After greeting the villagers, we left Kakaddara with a deep sense of commitment to do something for the village and other neighbouring villages. There are miles to walk and many things to accomplish. But a journey of a thousand miles always starts with a single step. We had taken that step. .

Amit and Swapnaja have been working as engineering professionals in oil & gas industry since the past decade in UK . In 2017, they took a career break to India to understand and resolve the issue of “farmer suicides” and tribal problems. During their stay at Gram Sewa Mandal (GSM), Wardha, they were impressed by the simple livelihood and wanted to opt for one. Amit worked with Paani Foundation on soil and water conservation issue .Thus he got an opportunity to get acquainted with the villagers and farmers in the region. They even paid visits to tribal villages in Gujarat to find out more about organic farming and sustainable livelihood.

In course of time, Swapnaja started supporting Khadi London providing a global platform for hand spun and handwoven fabric thus supporting families of farmers and artisans. They have permanently settled in India and are currently staying at Wardha. They are looking forward to living a natural sustainable lifestyle, practicing organic farming and working with village communities on issues like agrarian crisis, livelihood, health and education.

From our Blog Space

A Frayed History – a review

Cotton:Towards a Holistic Solution for Change