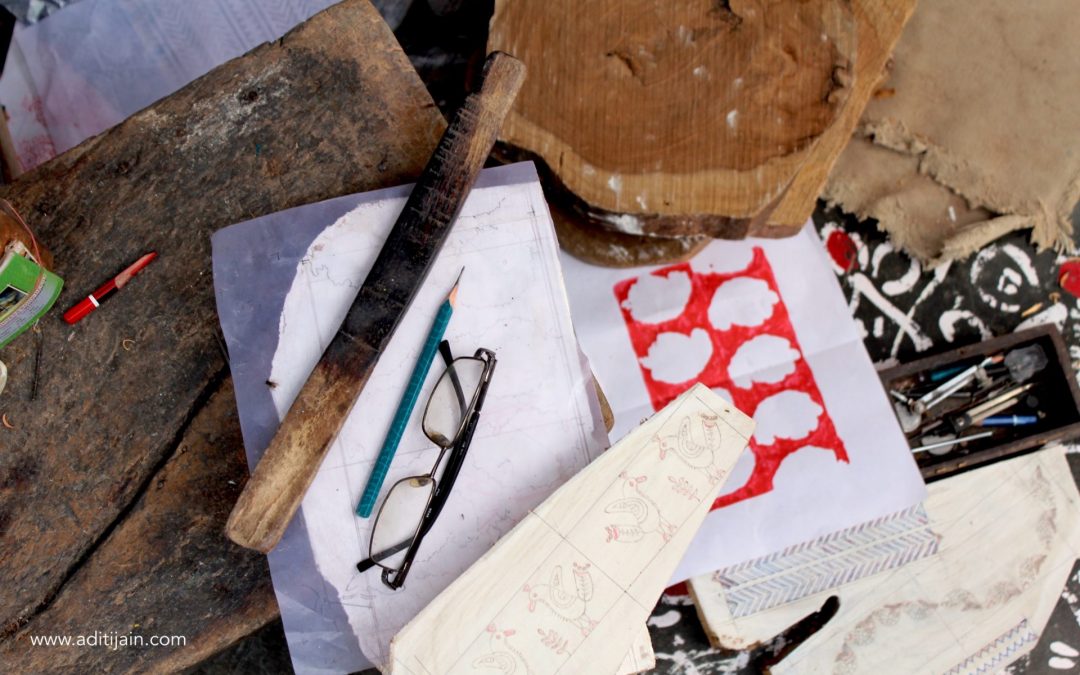 A Visit to Pedana: A Hub for Weaving, Block Making and Block Carving

Sometime in 2015, I had the opportunity to visit Pedana, which falls under Machilipatnam in Andhra Pradesh. It’s a small town known for its block printing and handloom weaving. I met Mr. Pitchuka Srinivas who runs a successful block printing and weaving unit in Pedana. I was also interested in the block making process and get a better understanding of the art of carving blocks. Mr. Srinivas took me to Mr. Gangadhar’s block making unit. They have the entire process in-house.

Slicing the Wood and Tracing the Designs

The first most important raw material of a block is the wood itself. The wood needs to be strong enough to survive the kind of wear that happens during printing. Teak wood is used for this reason. They procure blocks of teak and slice them into 1 inch width, and tools are used to make the surface smooth. The wood is cut to the approximate dimensions of the block which varies from 6 – 10 inches.

The design is drawn carefully on paper with the right angle edges marked perfectly. Then, oil is rubbed on it so the design is clearly visible from the back as well. The right side of the design is stuck against the wood so that once printed the mirror of the wrong side would give the intended design.

The intricate areas are first carved using various tools, then they move to less detailed areas. The extra areas of wood are removed at the end. The handle to the block is attached separately. Different blocks are made for each colour of the design which is planned beforehand. Once ready, the blocks are soaked in coconut oil for a few days to cure them.

Gangadhar Garu’s unit produces blocks for many brands and have a team of people working on the different areas of the block making process. The sheer variety of designs and blocks they have was over whelming.

After witnessing this whole process, I began looking at block printed fabrics with a keen eye. There’s a whole set of people who make a textile what it is. There’s always something more than just colours on a fabric.

The author, Aditi Jain, is a crafts and textile designer, facilitator and observer. Aditi has a deep appreciation for everything handmade. She loves documenting stories of people places and objects.

Related from our Blog Space

Dancing with Colours: My Love Affair with Natural Dyes as narrated by Rajashree Soneji

Innovations in Khadi: Lessons from Gandhigram by Aditi Jain