Festival of Natural Fibres 2022: The Best One Yet 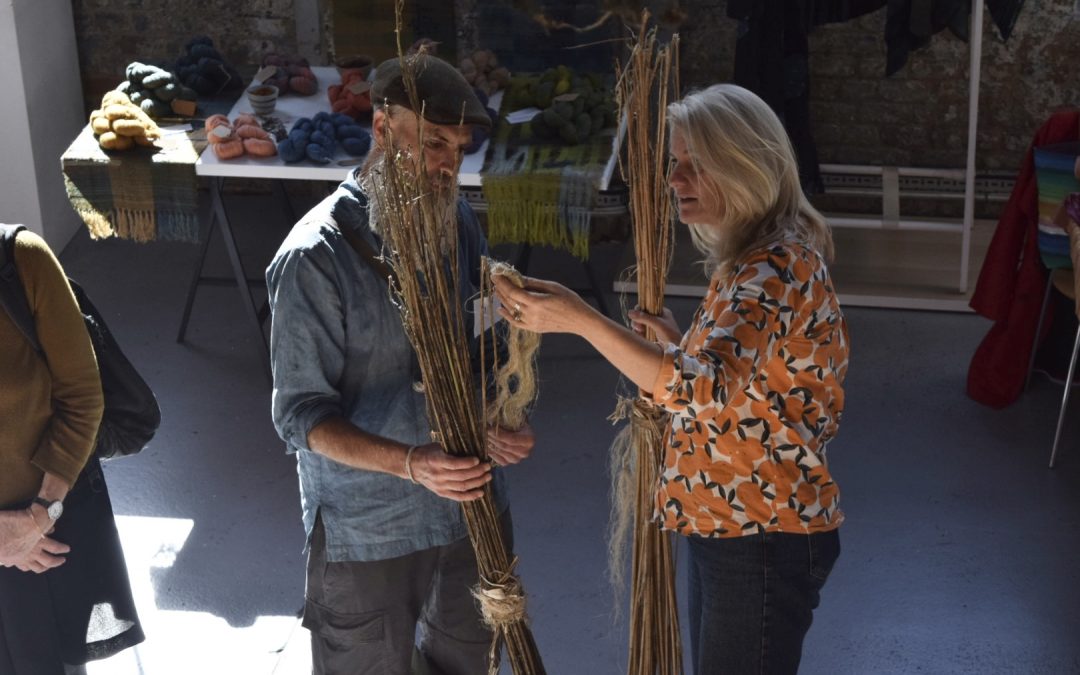 The Dilemma: Cancel or Postpone

As rail strikes loomed across the country just a week before the festival of natural fibres was due to take place, our team pondered whether
to cancel or postpone the gathering we had all so eagerly been preparing and waiting for. After much deliberation and
weighing of options, we made a collective decision to go ahead, with a member of our team injecting optimism into a
precarious situation, encouraging: ‘It will be the best one yet’.

It did, in fact, turn out to be the best festival yet. Our measurement of ‘best’ here refers to the consistent energy that
permeated individual interactions, panel discussions and craft workshops. What was evident on reflection, was that the
weekend was filled with emotion, energy, hope and a strong sense of solidarity.

A video message from Paul Bazely, who played the role of Gandhi in ‘The Father and the Assassin’ at the National Theatre
earlier this year, kicked off the weekend. As part of preparing for the role, Paul began hand-spinning lessons with spinning
expert and activist Asha Buch (Khadi London) and emphasised the profoundness of the experience and his observation of
spinning as a great equaliser.

During our first panel on the Growing of natural fibres, we were joined by Claire O’Sullivan (Contemporary Hempery), Amit
Dalvi (Beejkatha & Khadi London), Sanne van den Durgen (Raddis®), Ellie Byrne (Central Saint Martins) and Paula Wolton
(OneHutFull). The session was moderated by Jo Salter (Where Does It Come From?)

Practices spanned across the UK and India, from the experience of a student, to those planting seeds in their natural fibre
journeys (literally), to those working with established companies. Panellists touched on how fibres such as cotton and
hemp are intertwined with the histories of the lands, cultures and fibre systems. An important element of the panel
discussed the need for new systems and ways of thinking and organising to be built into business models. Sanne shared
how Raddis® is based on a subscription model, which links regenerative organic cotton customers to assigned acres of
farmland. In this way, the outcome of cotton cultivation (which often depends on a number of factors out of the farmers
control including climate) does not fall solely on the farmers shoulders, but the result is shared equally between both farmer
and customer. Food for thought.

The second panel on Processing, moderated by Gandhian activist and generational hand-spinner, Asha Buch (Khadi
London), brought together Rosie Bristow (Straw into Gold), Maria (Marsh and Moor), Kitty Wilson Brown (Contemporary
Hempery) and Yuli Sømme (Bellacouche). Maria brought forth the importance of craft in relation to mental health, while Yuli
shared her story of working since 2005 to create natural wool shrouds and the challenges of wool traceability. Kitty and
Rosie represented a generation of designer-makers inquisitive in understanding raw natural fibres before working them into
designs, respectively having delved deep into the processing of hemp and flax fibre. During the panel, it came to the
surface that hemp and flax fibre require similar processing methods and equipment, leading to the discussion of a
speculative future where a mid-scale decentralised processing plant is able to process the natural fibres grown in that
same region. The conversation also resurfaced the need for mid-scale processing equipment and the idea of ‘clusters’
wherein deep collaboration takes place in a community of natural fibre practitioners.

Each panellist brought forth their experiences with working directly with the value chain in different capacities and at
different points of the chain, including engaging first-handedly with shepherds, to processing raw natural fibre themselves,
to working directly with wearers to make an impact on behavioural habits in relation to clothing and textiles. They each
demonstrated how design processes, especially those that have a foundation of sustainability and regeneration, are
becoming more participatory and investigatory.

Justine shared her tangible investigation into the different sheep breeds across the UK, resulting in an archive illustrating
the richness and diversity of British wool. The panel also pointed to the need for designers and makers to challenge the
“porridge” aesthetic usually linked with natural fibres and experiment and innovate through for example, colour and pattern,
in order to invite in a wider audience and not solely those that have an initial understanding and interest in engaging with
natural fibres and colours.

The day was rounded off with a Town Hall Meeting moderated by Andy Rutherford and led by Kishore Shah (Khadi
London), Amit Dalvi (Beejkatha and Khadi London) and Sally Mason (Textile Travels). The discussion was then opened up to
the audience, with the topic in focus being collaboration, and how it is an integral element in working towards a greener
future. Kishore described how the festival has evolved as a collaborative effort and events such as the festival help in
generating a sense of community where like-minds bring their individual passions, and skill and knowledge sets together
as opposed to working against. Sally emphasised how this method has worked well for local travel businesses, and how
they also work in collaboration with the artisans they visit on their tours.

On Sunday morning, the conversation turned to Regenerative Fibres and New Economics, fittingly moderated by Rachel
Sheila Kan of The Ecosystem Incubator, a collaborative of micro players in sustainable fashion that come together to work
as one to build towards a future economy. On the panel was Bel Jacobs, writer, speaker and activist with a focus on animal
rights, the climate emergency and the toxic fashion system, Vanessa Barker (Bedstraw & Madder), Ashna Patel (Khadi
London) and Kishore Shah (Khadi London).

As the interest in regeneration has fast gained momentum in the fashion and textile industry, the panellists discussed its
potentials and pitfalls, with an important point being that ownership of land should remain with the peoples of the land, or
the industry could gradually reintroduce colonial relationships between wealthy westerners and producing communities.
The topic of scaling up within decentralised producing communities was also discussed, and whether scaling up aligns
with regenerative principles. It was emphasised that this conversation and others alike, should include and centre native
voices, as well as the importance in using technology appropriate to the context, for example, large solar charkhas or peti
charkhas depending on what would work best in a specific context.

Bel emphasised the urgent collective change needed in order to combat the climate crisis. The panel came to a close with
each panellist sharing what they believe is the key in moving forward towards new regenerative economics, and it was the
values of compassion, kindness, and collaboration that were brought forth.

The festival closed with an intimate debut screening of ‘The Nettle Dress’, which follows Allan Brown on his journey of
creating a dress entirely from foraged nettles over a period of seven years. In the film by Dylan Howitt, Allan shares his
initial engagement with nettles whilst exploring the forest with friends. This develops into an activity wherein the drop
spindle becomes Alan’s companion during periods of loss, grief and moments of his daily life.
The film manages to portray and beautifully intertwine Allan’s journey of surrendering himself to learning about nettle fibres
and their processing through foraging, hand-spinning, hand-weaving, to mediaeval tailoring. Then to the hardships he
navigated during this exploration, resulting in the nettle dress which became a symbolic embodiment of the past seven
years.

It is safe to say that the film touched the audience as collective silence and admiration pervaded the room. During the Q&A,
Allan and Dyllan shared that in keeping with the low-carbon creation of the dress, the filming was also
environmentally-considerate, with the duo working and filming locally. It’s an interesting point to dwell on, as we think
about how the film industry can imagine a low-carbon economy.

On behalf of the Festival of Natural Fibres team, we would like to extend our deepest gratitude to all participants and
visitors. It is really with you that this gathering continues to thrive and remains buoyant. We would love to hear from you if
you have any feedback on how we might be able to better our efforts, or if there is anything else you would like to share.
May all readers deepen into their natural fibre journeys over the year ahead, and we look forward to welcoming you next
year for The Festival of Natural Fibres 2023.

In Community, Compassion and Collaboration,
The Festival of Natural Fibres team

Where Does It Come From?

(with support from the Festival of Natural Fibres team)

Sinning a Yarn: Clicks that Tell a Tale

Video on Festival of Fibres 2018 by Ethical Hour