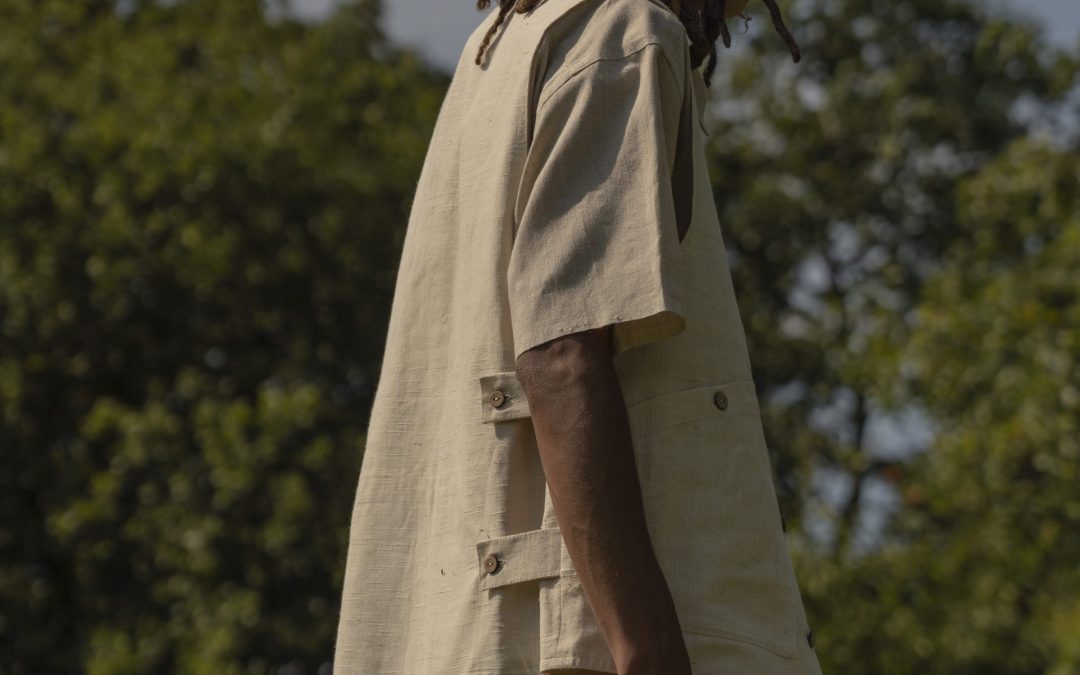 As member of the Indian diaspora, my experiences are half embedded in a Western society, and half resemble traces of my heritage. My ancestral lineage often informs my lifestyle, rituals, values, spiritual beliefs and my practice as a designer and maker. The fading of roots, knowledge and tradition is balanced with a strong inclination to relearn, reconnect and re- root in my lineage. And so, my MA project met my experiences and opened up pathways to new ones. Pathways to conscious, collaborative clothing.

The opportunity to work alongside Khadi London grounded my project in ancestral and cultural reconnection. My father shared his experiences of learning how to spin cotton on a charkha in school back home and went on to practice indigenous farming methods which he learnt from his father, my dada. In Earth Logic, under one of the eight values that flow out of a paradigm where earth comes first, the authors suggest, ‘Multiple centres are a necessity to make sure that we are drawing on all knowledge, wisdom, capabilities and creativity on earth to save our earth… including direct experience, practice, indigenous knowledge, artistic exploration, spirituality, and theory, among others.’ (Fletcher & Tham, 2019).

I first came across Khadi London earlier this year. I was looking to connect with companies that have a surplus of pre-consumer fabrics that I could work with. Within a couple of minutes of speaking with the founder, Kishore, I felt welcome into the movement of natural fibres, a movement that he so strongly and pro-actively supports. With the unravelling destructive consequences synthetic materials have on the environment, the synergy between materiality and clothing was a prioritised exploration, and I set out to ask the following question:

How might makers of conscious clothing work alongside textile initiatives that are rooted in natural fibres, tradition and the well-being of their value chain?

My intention and focus from the very beginning of my project was to engage with a new designer role. One which steps outside of the studio and explores the possibilities and challenges when we reach out to be in closer and deeper dialogue with integral members of the value chain. What are the origins of this textile? Whose hands and minds were responsible for bringing it to life? Who am I designing for and how might I nurture a more emotionally stable relationship between wearer and garment?

Empathy with the Material and the Value Chain

Khadi London ask some of these very questions. They have an innate understanding that in order to thrive, their value chain needs to function in symbiosis. Their efforts to understand the processes, values and needs of their suppliers and their customers translate into a meaningful Community Interest Company with potential to make positive shifts in the industry. Working with Khadi London helped me to better understand the garment and textile value chain and brought to light the importance of being able to do so.

The collaboration also encouraged and developed the importance of the role of materials in clothing design and production. Through actively learning about the material’s history, story, and processing, the knowledge was translated into a deeper connection when engaging with the fabric. I was building a firm understanding that the indigenously processed material was not harmful to its life givers, and will not be harmful to its future wearers.

Stories told through the Surface of Khadi

Jo Salter, founder of Where Does It Come From? references an interaction she had with a khadi producer who explained: ‘The cotton this year is going to be better than last year because last year we didn’t have much rainfall.’ The stories told through the surface of khadi, about the weather conditions that it has faced and the farmers, artisans and craftspeople whose hands it has passed through infuses the material with individualism and spirit. These qualities speak to the philosophy of wabi-sabi, which talks of ‘materials that are visibly vulnerable to the effects of weathering and human treatment. They record the sun, wind, rain, heat and cold.’ (Koren, 2008).

Indigenously-processed khadi is often handspun, handwoven and hand dyed resulting in inconsistencies and flaws in the yarn and final cloth, such as slub yarn (a yarn with thick and thin sections alternating regularly or irregularly), mottling of the dye and/or cotton seeds visible on the fabric’s surface. These traces of human interaction and involvement are physical reminders that ‘inspire a reduction of physic distance between one thing and another thing; between people and things’ (Koren, 2008). Instead of discarding or camouflaging these properties, I created simple, well-cut shapes that left room for these rich and diverse narratives to be embedded into future ones.

The project resulted in a limited series of six socially-designed garments hand-crafted from khadi cotton. As well as connecting with Khadi London, I opened up my studio in Denmark to members of my local community for individual and group workshops. This was an exploration of a more intimate designer-wearer collaboration, and an endeavour to shift fashion into a social endeavour where we are in closer dialogue with each other, ourselves, our clothes and our clothing habits.

Developing this relationship with wearers often felt like stepping into unfamiliar territory, and brought feelings of discomfort and uncertainty. However, creating a space where ideas, experiences and dialogues were shared showed potential to contribute to cultivating garments — and experiences — that fulfil our fundamental human needs outlined by Max-Neef such as creativity, participation and understanding. It also brought the opportunity to have a conversation about our relationship to fabrics. It felt so potent to share my knowledge on khadi while wearers could physically engage with it. I realised the profound effect this sharing could have – to inspire their own conscious engagement with the cloth, to treat it as a friend and respect its service.

The current disconnection between the value chain has correlated in a disconnection between our actions, as practitioners and wearers, and their impacts on both the human and non-human ecosystems. In this way, efforts to build a meaningful collaborative network have potential to deepen the narratives embedded within a garment, and activate new realities that hold the potential to ripple out balancing the ecological, social, economic, and cultural systems that bring garments into fruition.

Related from Our Blog Space

Fibres and Spindles: Importance of Getting It Right

Innovations in Khadi: Lessons from Gandhigram

Jaipur Conference: Perspectives on Khadi as an Ethical Movement

Ashna is a designer-maker from London, and a recent graduate of MA Sustainable Design from Design School Kolding, Denmark. With a strong grounding in the field of sustainable design, her work encompasses natural fibres, craftsmanship, and garment design. Each exploration is rooted in finding solutions through meaningful collaboration and community-building, and aims to create visibility around and prioritise the relationship between human labour, planetary resources, and our clothing and textiles.