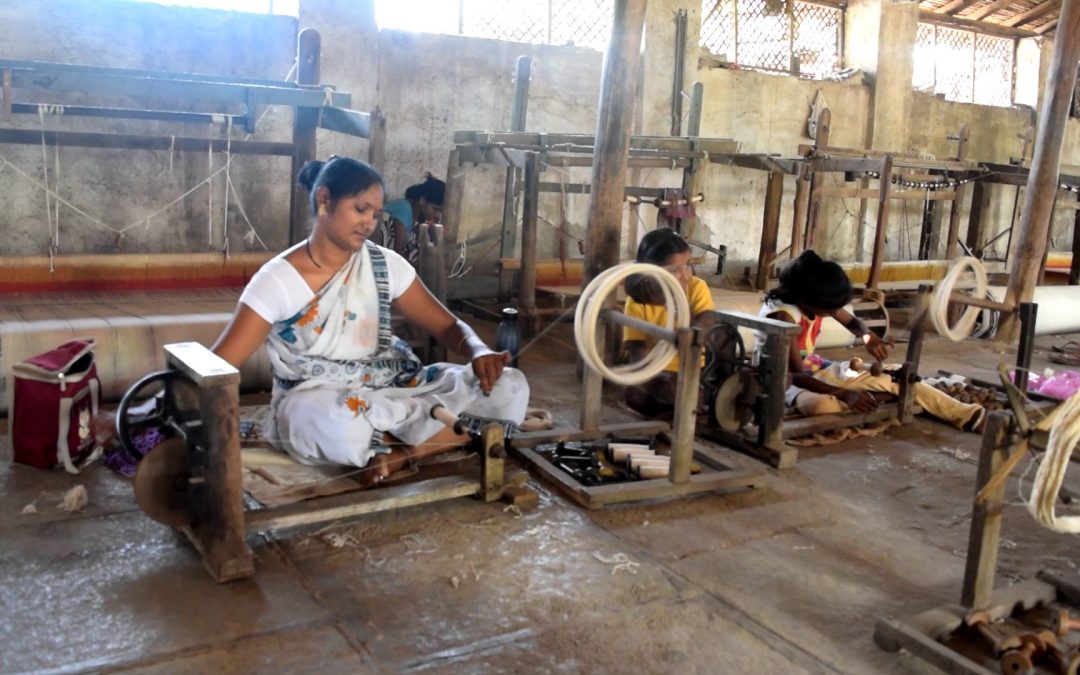 Charkha: The Wheel of Empowerment

The author, Ojas of Gram Sewa Mandal, reflects on the meaning of spinning for the kattins (women spinners) who spin the charkha for a livelihood. The confidence, respect and ultimately the empowerment that come with spinning often have a greater attraction for the kattins. And thus, the title, Charkha: Spinning for Respect, Confidence and Empowerment. The spinners are addressed as sister, didi, a term of respect common in northern India.

GSM has a residential campus in Gopuri, a village in central India. GSM was founded by Vinoba in the 1930’s. Community living is an important aspect of life on the campus. To learn more about GSM and Vinoba please see notes at the end of the blog.

Cooking and dining together, or sahbhojan as we call it, is a favourite past time at Gopuri. Any excuse is good enough for a sahbhojan, a time for chats, for sharing our happiness and our woes.  It was on one of those sahbhojan days when a kattin didi, Smita, from a far-off village joined us.

The chitchat and sahbhojan continued till late into the evening. Concerned about her wellbeing I asked Smita about how she was going to return home. She looked relaxed and told me that her son was coming to pick her up in his car. This came as a bit of a surprise to me as I would never have imagined that the son of a spinner could afford a car.

What unfolded thereafter was a fascinating and inspiring tale. Talking about herself and her sisters, Smita said, “WE were economically backward when I was a kid. With my dad’s meagre earning, we could only afford pithla bhakari and hardly saw any veggies in our plates. We simply couldn’t afford the veggies. Me and my sister learnt spinning on an amber charkha when we heard about Vinoba’s work”

Charkha is a part of my life now

For every hank of yarn spun an amount goes towards a welfare fund and education scholarships. Smita’s children did well and excelled in engineering and civil services. I could not contain my curiosity and asked, “Now that you are financially well settled, why are you still continuing spinning for a livelihood”. Her reply was inspiring, “How can I ever let go a charkha which has helped to become what I am today? It’s part of my life now”

With a few gives and takes women from farm household and Adivasi families in and around Gopuri share the same sentiments. They all earn money by spinning on an amber charkha, a multi spindle hand spinning machine.  It is an import source of livelihood for them. Charkha has become a part of their life and their self-respect.

For every hank she spins, a kattin didi earns ten rupees. Only a part of it is paid in cash as the rest is set aside for bonus, welfare fund and pensions.  Their cash income tends to be around 100 to 150 rupees per day. But, as in the case of Smita, it is the extras which can often make a big difference, can help the spinners and their families turn their life around.

Spinning is at the centre of the supply chain for khadi, a supply chain which starts with growing cotton, carding and ginning it and making slivers ready for spinning. The spun yarn is then woven into yarn and sold, ideally to local consumers. In Gandhi’s vision, khadi was a symbol of a self-sufficient economy, empowering communities to relate with others on their own terms.

A Satyagrah (a non-violent campaign) for Fair Renumeration

Khadi preceded the ideas of fair trade by several decades. Spinners earned one and a half annas per hank in 1920.  Vinoba worked in the villages and was aware that this was far from adequate. To prove his point, he decided to show what it would be like to survive on income from spinning. He would spin all day long and live on the earnings from the spinning. It was exceedingly difficult to survive on that income, He campaigned for a fourfold increase in amount paid for spinning, to six annas per hank.

The campaign was a success. After much deliberation, the Charkha Sangh increased the remuneration to three annas. Charkha Sangh was the central organisation for promoting spinning at that time. It also functioned as a regulatory body. There is a detailed description of Vinoba’s experiment and campaign in his memoirs ‘Moved by Love’.

Gaining Confidence, Respect, and a Voice

Deciding on an optimum remuneration for spinning continues to be a challenge for khadi organisations as any increase in the cost of spinning increases the price of the final product. And thus, difficult to sell. I still wonder why women did the spinning for what I consider is a low amount.

The experience of P N Satish from his work women’s groups in Jharkhand point towards an answer. He trained at the prestigious National Institute of Design in Ahmedabad. Satish has always been fascinated by khadi. He is also a part of the Kora Design Collaborative. Satish gave portable single spindle charkhas (Peti Charkha also called Box Charkha) to members women’s group. Initially the women struggled with spinning as they somehow managed to make a single thread out of the cotton slivers.

With practice they started earning small amounts. That small amount boosted their confidence.  They experienced the happiness of earning one’s own bread in a respectful manner. Next, they realised that there is a relationship between the length of the hank and the money it makes. It inspired them to spin more efficiently, produce more yarn and earn more. Their earnings slowly helped give them a voice, they became part of the decision-making process in their households.

This work from home is priceless for women who have always been in an “eternal lockdown”. In the cotton’s journey to the finished fabric, spinning is the most important milestone. These hand spun hanks have supported innumerable families through a respected source of income. For these women khadi is not just a fabric, it is a path to happiness and satisfaction

Watch this space for discussions on different types of charkhas and their applications.

Gandhi’s autobiography (An Autobiography: The Story of My Experiments with Truth, Publisher: Beacon press)

Moved by Love (The Memoirs of Vinoba Bhave), Translated by Marjorie Sykes from a Hindi text prepared by Kalindi. Published by Paramdham Prakashan.

The Social Life of Khadi: Gandhi’s Experiment with the Indian Economy, c 1915 -1965 by Leslie Hempson