Weaving from Within: Narratives from Kutch 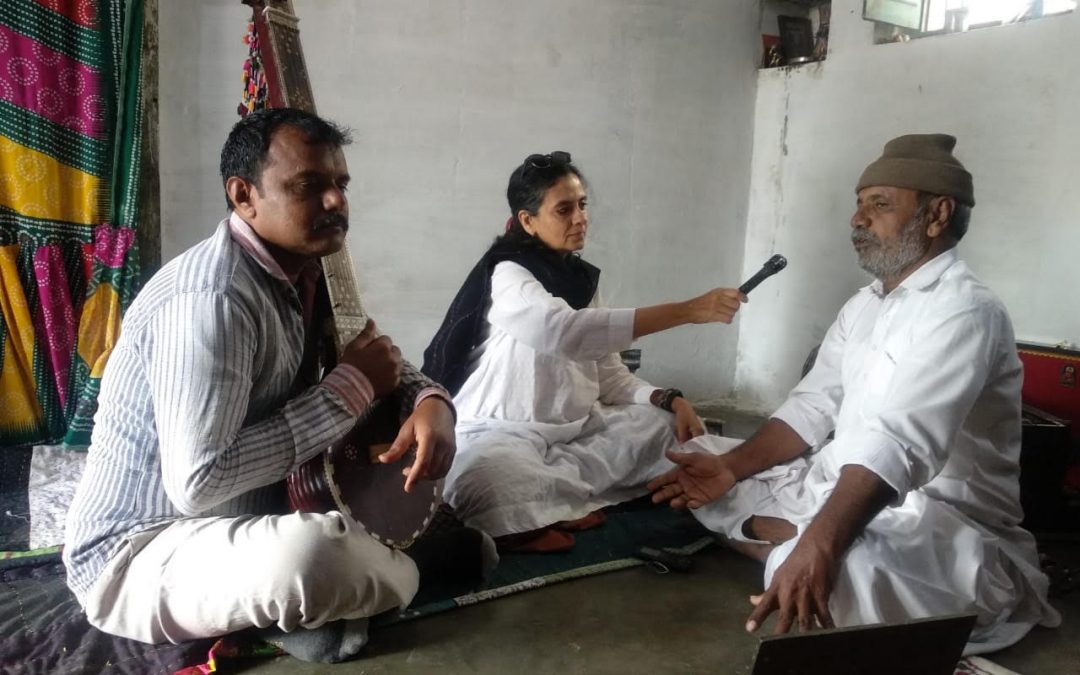 A Digital Satsang: Weaving for Hope

It is a season for digital events; beginning to lose its lustre. I was a bit hesitant to log in for an event on weaving and bhanjan mandlis hosted by Khamir. I am glad I did. It was a genuine dialogue, not a repetition of platitudes. it was a dialogue with young weavers of Kutch. Many are returning to weaving. And to bhajan mandlis, where the community comes together for a performance of devotional songs. Meera Goradia, who has built a special relationship with artisans of Kutch for over twenty five years, introduced the participants. She described it as a satsang, a gathering of good people.

In the true sense of satsang we were inspired by words of wisdom and treated with songs of devotion sung with passion. it was a digital satsang and a trend setter for new ways of engaging with crafts. Maybe a harbinger of what lies ahead of us in the post Covid 19 era. Meera knows the artisans, the people and their culture well. She brought out the best from the young weavers; through question and answer sessions and their songs of devotion – their bhajans, The panel response at the end of the event was the icing in the cake.

A Revival of Weaving and Bhajans

Weaving and bhajan mandlis are witnessing a revival in Kutch. Bhajans are an important expression of the Bhakti Movement, a movement that has strong associations with artisans and crafts. Together they are weaving a new hope. Meera remembered Kabir Das, a 15th century poet saint, a weaver. She mentioned Sant Raidas, a leather craftsman.

Teachings and songs of the poet saints of the Bhakti Movement continue to be a liberating force in northern India. Kutch is no exception. Just as every weaver’s home has a loom, every village in Kutch has a bhajan mandli. At the digital satsang they were represented by bhajan mandlis of two large villages, Bhujodi and Nakhatrana. Villages with a better internet connectivity than others.

Ego: the Virus of the Mind

Naranbhai Vankar of Bhujodi was the first to answer questions. His response on the experience of Covid 19 was inspiring. He was afraid at first when he heard about a global pandemic, And then, a greater sense of fear followed when patients in india were tested positive, and then, a sense of control as he learnt that there were ways of keeping safe.

A voice from within guided him to learn from the tortoise, to take a defensive posture and keep calm. ‘Bhajans’, said Naranbhai, ‘have helped being mentally fortified’. Talking about virus within, the ego, Naranbhai had clear views, ‘satsang is the way to go beyond ego’ and to bring the mind under control. Satsang, bhajans and words of wisdom from saints act as sanitisers, keeping us safe from this virus of the mind, the ego. Sanitisers which help us ride the mind rather than keeping it from going in its wayward ways.

The next question and answer session was with Haresh of Bhujodi who has recently returned to Kutch and weaving after a stint away from home. Bhajans arise spontaneously when he is weaving. Haresh says that there is a strong connection between crafts and spirituality, ‘sadhus and sants immerse themselves in bhajan day and night (aath paur)’. In days long gone they tied ghungroos (musical anklets) to looms. This helped the weavers keep the rhythm as they sang from memory, The song which Haresh and his companion Khimji bhai entertained us with is another reminder about the importance of calming the mind.

Khimji bhai gave a brief introduction to the song. It is a conversation between Kabir and his guru, Ramanand. Kabir says to his guru, ‘ a bath in the holy rivers washes the body but not the mind’, and continues with other analogies. A victory over inner demons calms the passion but fails to still the mind. Toiled the fields and hard work in stone quarries doesn’t help either, the mind did not calm despite doing great deeds. A joyful rendering of the song by Khimji bhai and Haresh lifts the spirits, especially the refrain, ‘oh Lord feel my being with joy.’

Kabir, bhakti movement and One Deity

Naran bhai shared insights on the practice of aradhyavani which involves the worship of a preferred deity. In days gone bye people of Kutch worked hard all day and were fatigued when they returned home. In the absence of radios and mobiles to entertain them they turned inward to share their inner feelings, their joys and woes. Or to ask for a favour or maybe give thanks . Devotion was often blessed with an inner voice, words of wisdom or songs of joy and sorrow.

A quote from the introduction to ‘Songs of Kabir’ translated by Arvind Krishna Mehtrotra helps in understanding the context. ‘Kabir’, Mehrotra writes, ‘ is part of the larger devotional turn known as the bhakti movement. Described as a “great many sided shift…. in Hindu culture and sensitivity,” its distinguishing feature was an inward love for the One Deity, in disregard of, and often in opposition to, religious orthodoxies and hierarchies. The degree and nature of opposition varied, but it was never wholly absent’.

Naran bhai’s interview with Kalpavriksh in December 2019, sheds further light on the idea of ardhya (see video below). He talks about the formless and the personal deity, and, about finding the right balance between the two. he illustrates how these rituals have changed over time. Worship of an alcove filled only with an earthen light which has gradually been replaced by worship of idols.

Naran bhai sang a bhajan before the interview which describes an inner being that transcends the mortal being. An inner being which can feed itself without a beak, that can fly without wings.

A song that the Nakhatrana Bhajan Mandli sang depicts a similar theme. They sang about mortality, about the futility of adorning the palace like body with expensive ornaments and of wearing delicately woven clothes. A day will come when the body will no longer be. The song reminded me of a powerful doha (rhyming couplet) by Kabir . Why do you knead me, the clay asks the potter, a day will come when I will knead you.

Weaving a Culture for the Future

With new forms of entertainment and an accompanying erosion of the traditional culture, some people feared that their culture would become extinct. About seven years ago a group of youth in Bhujodi came together to form a bhajan mandli because they were afraid of loosing strength that the their culture gave them. Mobiles came in handy to record bhajans sung by the older generations and practice singing. The mandli has grown since then and now has a membership of 15 to 20 bhajniks (bhajan singers). Other villages invite them to sing and entertain or to bless ritual occasions. To use a phrase that has become popular in the post Covid era, the Bhujodi bhajan mandli has become atma nirbhar – self dependent.

The idea of self dependence and resilience came across in other ways as well, especially in answers to questions about the impact of the lockdown and how they were coping with it.

Young bhajniks are still a minority. Many young Kuthchis still prefer modern media for entertainment. They are not against bhajans and the traditional culture, but as Meera explained during the question and answer session, they feel that everything has its time. Youth is a time to enjoy not for serious spiritual practices. For others, such as Haresh of Bhujodi, it is a response to an inner call. Singing bhajans fills them with joy and gives them a sense of fulfilment.

The discourse wasn’t just about high spiritual ideas such as calming the mind and mortality, it was also about how people were relating to their craft and to one another. When asked about a favourite doha of Kabir in the context of Coronavirus, there was a pause and then suddenly an answer that surprised me. A popular doha about taking care of all, without malice or attachment, even in when transecting business, when trying to sell your wares in the bazaar.

This was the first in a series of four webminars. The dialogues in the webminar series give a sense of positive change taking place in Kutch and elsewhere in rural India. A change that is rooted in traditions but not stuck in the past, a change that embraces inclusiveness and adopts new technology for its own advantage. A change that is compassionate and looking for that fine balance which skirts attachment and malice. We will explore the transformation which is taking place in Kutch and elsewhere in India through this blog space. Any ideas or contributions for this exploration will be welcome.

The webminar series was organised by Khamir and moderated by Tanveen Ratti. Tanveen skilfully brought together the voices of artisans, resource persons familiar with the field and global audiences watching from the comfort of their homes.

You can watch the webminar, which was conducted in Hindi, below. The music is great. If you are not familiar with the language, skip the dialogues and enjoy the music. Links to recording of the other blogs follow. The webminar on spinning is in English. In addition we have listed a few other relevant resources at the end.

A Video recording of the Digital Satsang

Links to recording for the other webminars in the series.

Mastering the future after Covid19

The Kabir Project consists of a series of ongoing journeys in quest of Kabir.

Sandhani; A study of of the revival of weaving in Kutch.

In her blog “….as if time had stood still” , Henrietta Adams of HENRI LONDON reflects on a short visit to Khamir to get an experience of the supply chain for kala cotton.

‘Songs of Kabir’ translated by Rabundranath Tagore and introduction by Evelyn Underhill. First published by The Macmillan Company in 1916.

“Songs of Kabir” translated by Arvind Krishna Mehrotra, published by New Your Review of Books in 2011.